“With AdRem NetCrunch we could switch from reaction to action. We can now find the issues sooner and resolve them even faster”. 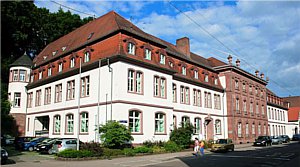 One of the Neunkichen County buildings

The Neunkirchen County network consists of almost 40 servers and around 400 users. It is a heterogeneous network with various servers and front-end operation systems (mostly Windows, plus a couple of Linux ones).  Offices at different sites are connected via VPN and all users are connected to the servers via this network. Employees use standard office software, special government applications as well as e-mail, Intranet and internet.

Centralized yet efficient monitoring of the network and servers’ performance has been a serious challenge due to the complexity of the network. Before implementing NetCrunch, the systems management team needed to implement several tools in order to receive notifications about network failures, and to pinpoint the source of the problem. Various systems had to be permanently monitored, but sometimes only user feedback helped them discover a network issue.

With NetCrunch it is possible to learn about the problems early, solve them quickly and because of this the IT team has been able to ensure smooth workflow for the users. As all notifications are now collected in the centralized system, it is easy to delegate them automatically to the correct administrator, thus further shortening the reaction time.

Thanks to NetCrunch, the systems management team can now easily create a report concerning the current health of the network. They can also automatically log where the problems originated and how long it took to solve them.  NetCrunch enabled the team to analyze the network performance and find performance improvement options – the increased network performance could then be proved in NetCrunch-generated reports.

Mr. Seel has found NetCrunch especially helpful in documenting connections problem they had when implementing the time and attendance terminal. The terminal would frequently go down, and so the work time of the employees could not be correctly measured and transmitted to the server. NetCrunch has helped the team to document the failures so that they could send the detailed report to the terminal producer. In this way, the problem could be solved by the producer himself.

Before implementing NetCrunch, the county’s IT team has compared both benefits and shortcomings of several network monitoring software packages, but several factors ruled in favor of NetCrunch, especially short configuration time as well as clear and comprehensive graphical presentation of the network structure.  The systems management team liked the graphical “traffic light system” used on the network maps to signal problem that made it easy to spot the issues at first sight. The monitoring rules for the nodes belonging to the same group helped the IT team create hierarchical views of the network that proved to be useful in the daily jobs of the administrators as they could have the real-time overview of the network health at any time. At the same time, they could quickly drill down to check the status of any particular device.