“I would recommend NetCrunch to both IT administrators and IT manager. Advanced alerting and reporting capabilities of NetCrunch allow me to concentrate on strategic issues and make informed decisions for budgeting and network expansion planning.” 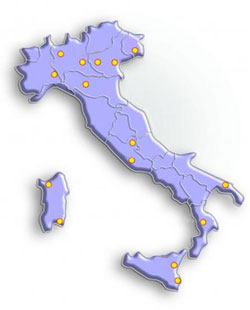 Conforama Italia is a business supported by a typical MPLS network. This is best suited for the company, as the main office is located in Vergiate, the warehouse is located in Northern Italy and there are 15 remote sites that are located throughout the country. The sites are separated by a firewall and connected via two MPLS routers, a primary and back-up.

Before implementing NetCrunch, the IT team would rely on free and open-source tools to support their monitoring tasks but those tools required frequent updates and maintenance.

For optimizing the navigation through particular sections of their network, the first thing that NetCrunch helped them achieve was creating a dynamic map (network diagram) for each site. Consequently the monitoring of over 4000 nodes was optimized – all workstations, laptops and some less important devices were set up in a simplified monitoring mode, with a polling time of 60 minutes. The network engineers wanted to concentrate on the mission-critical servers and applications like AS400/ Lotus Notes, BlackBerry, Oracle and MS-SQL databases.

IT staff at the main office explained that all servers’ key performance counters are now monitored, including selected specific parameters obtained via SNMP. NetCrunch tracks important statistics like the total number of incoming error TCP packets for the main infrastructure devices like switches and routers.

“We have also created a special custom views for servers dedicated to the heating plants. Thanks to the predefined Availability Report Map, we have realized that one server has been not responding for about one day. We have fixed the problem immediately. We have added new actions to the policy so that we are notified via email and SMS (text message) if it happens again in future.

At Conforama Italia, NetCrunch is used by 4 people. I would recommend NetCrunch to both IT administrators and IT manager. Advanced alerting and reporting capabilities of NetCrunch allow me to concentrate on strategic issues and make informed decisions for budgeting and network expansion planning”. - says company's IT Manager.

About Conforama Italia and Emmezeta Moda

Conforama Italia S.p.A. is the Italian subsidiary of the Conforama Group that operates as a retailer specialist in home furnishings in several European countries. Some of Italian stores function together with Emmezeta Moda-branded units with clothing and footwear offering. Today there are 15 Conforama and 13 Emmezeta Moda stores in Italy.